What Do you Need To Know About Cerebral Palsy? 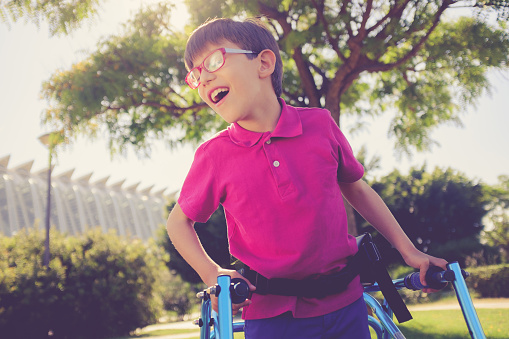 What Is Definition of Cerebral Palsy?

Cerebral palsy is a general term describing a group of chronic non-pregressive neurological symptoms which cause impaired control of movement and which are evident in the first few years of life, usually before age 3. The disorders are induced by damage or faulty development of the motor areas in the brain, disrupting the patient's ability to control movement and posture. Symptoms of cerebral palsy include difficulty with fine motor tasks such as writing, poor balance and walking, and involuntary movements. The exact combination of symptoms differs from patient to patient and may vary over time. Some patients also have seizures and intellectual disability, however, this is not always the case. Babies with cerebral palsy are frequently slower than average in achieving developmental milestones like learning to roll over, sit, crawl, smile, or walk. Cerebral palsy is usually thought of as congenital or perinatal, however, it can also be acquired after birth. Many of the causes of cerebral palsy that have been identified through research are preventable or even treatable: head injury, Rh incompatibility, jaundice and rubella (German measles).


What is Diagnosis of Cerebral Palsy?

Doctors diagnose cerebral palsy by tests of motor skills and reflexes and by medical history.

Magnetic Resonance Imaging (MRI) and Computerized Tomography (CT) scans are typically ordered when the physician suspects cerebral palsy; howerer, they are not definitive. These tests can provide evidence of physical abnormalities such as hydrocephalus (an accumulation of fluid in the cerebral ventricles of the brain), and they can be utilized to exclude other brain disorders. These scans do not prove that the patient has cerebral palsy; nor do they predict how well a specific patient will function in the future. Patients with normal scans may have severe symptoms, and while others whose scans are clearly abnormal have only modest physical signs. However, as a group, patients with cerebral palsy are statistically more likely to have brain scars, cysts, and other changes visible on scans. When physical examination suggests cerebral palsy, an abnormal scan helps confirms the clinical diagnosis.

Even though specific symptoms can change as time passes, cerebral palsy by definition isn't progressive, so if a patient shows increasing impairment, the problem is usually another neurological disorder.


What is Varieties of Cerebral Palsy?

Cerebral palsy is classified by the type of movement problem (such as spastic or even athetoid cerebral palsy) or by he body parts affected (hemiplegia, diplegia, and quadriplegia). Spasticity refers to the inability of a muscle to relax, while athetosis refers to an inability to control its movement. Babies who are initially hypotonic ("floppy") may later develop spasticity. Hemiplegia is cerebral palsy that involves 1 arm and 1 leg on one side of the body, whereas diplegia is the involvement of both legs. Quadriplegia refers to symptoms involving all 4 extremities as well as trunk and neck muscles. Balance and coordination problems are referred to as ataxia.

For instance, a patient with spastic diplegia has mostly spastic muscle problems of the legs, while perhaps also displaying a smaller component of athetosis and balance problems. The patient with athetoid quadriplegia, on the more hand, would have lack of control of the muscles of both arms and legs, however such a patient will usually have smaller problems with ataxia and spasticity as well. Normally a child with quadriplegic cerebral palsy will be unable to walk independently. The degree of impairment can vary from patient to patient and range from mild to severe.


What Is Cerebral Palsy Therapy?

There is no standard therapy that benefits all patients. Drugs are useful to control seizures and muscle cramps and braces can compensate for muscle imbalance. Surgery, mechanical aids to help overcome impairments, counseling for emotional and psychological needs, and physical, occupational, speech, and behavioral therapy are all effective.


What is Prognosis for Cerebral Palsy?

Though cerebral palsy is incurable to date, many patients can enjoy near-normal lives if their neurological symptoms are properly managed.


What Is Medical Research?

There is evidence which suggests that cerebral palsy results from incorrect cell development early in prenatal life. As an example, a group of researchers has recently observed that approximately one-third of cerebral palsy patients also have missing enamel on certain teeth. Bleeding inside the brain, breathing and circulation problems and seizures can all cause cerebral palsy and each has separate causes and treatment. Researchers are currently conducting trials to determine whether certain drugs can help halt neonatal stroke, and more investigators are examining the causes of low birth-weight. More studies are being done to determine how brain trauma (like brain damage from a shortage of oxygen or blood flow, bleeding in the brain, and seizures) can cause the release of brain chemicals which lead to premanent brain damage.